The one year old child wailed for attention. Multi-tasking in the kitchen, she too wanted to scream back at him.
"Your food, home,clothes and toys don't appear by magic. I have to work hard for you to have them. Yet you just take them for granted and expect me to take part in your silly games! And is it so tough to not make a mess for me to clean up? I gave birth to you, and will take care of you. Don't make the rules on how I should express my love for you!"

She shouted instead "Oh God! Why can't you, Help!"

God too wanted to scream,
"The planet, sun, gravity and wind don't appear by magic.
You make a mess by inventing money, & polluting products & think your life is tragic.
Why do you constantly for me, yelp?
Don't you realise, I have none for my help?"
22 comments:

Nightmare on the Dream Job

"You are going to live your dream" a friend cooed. The bride, blushed and giggled. That was exactly ten years ago.

Today, alone She stood, with the crowd, on the streets. Searching for a job, any job, since she had been kicked out of that Dream Job.

It had not been easy to accept that, after ten years of marriage, her husband was divorcing her for another woman. But her sadness turned to alarm when her lawyer shed light on the legal angles. She had been earning during the first five years of marriage. But she had used her salary for household expenditure and buying consumer durables (billed in her husband's name) for her 'home'; and her husband had saved his income and used it for buying the house in his name. She had quit her job, to help him in his business and had worked hard on that too till a year back.

Since it had flourished he had expanded and even though it had been through her help, there was nothing on paper. She had assumed that the law would recognise her efforts towards raising the family and business. But today, with a shock, she realised that the law recognises only papers which showed proof of ownership, and even if assets were purchased from her income, what mattered was only what the invoices stated, and those were in his name. She was not sure if he had intended this, but now it didn't matter. It wouldn't be easy getting a new job. No employer wanted a woman who was coming to work after 5 years and was emotionally distracted and financially unstable. She had assumed that she would get alimony and maintenance and a few assets.

But now, it seemed no hard assets and no portion of his investments, provident fund or pension would come to her. Even alimony, she realised today, was now at the judge's discretion and based on her husband's income. The law says the husband should take care of the woman's 'reasonable' needs through alimony and/or maintenance after divorce. The problem lies in defining 'reasonable'. The most she could hope for, would be one-fifth of the husband's pre-tax (roughly a third of his post-tax) income as alimony. Even though he was successful, she didn't now know how she could prove his income. All his statements went to his office and parts of his income had been turned to 'black'. Now he was even showing a loss on paper. Hindu law also provides for a reverse payment from an earning wife to the non-earning husband. Wonderful! Just what her husband needed to harass her further.

Even to claim the items she had bought from her parents on marriage, she had to prove that they were part of the 'stridhan', and she was not sure if she had sufficient proof towards it.

Even her child, she realised with a shock, was not hers. The law grants many a privilege to the father. For her husband, their daughter was just another pawn to be used against her. She had been about to make a settlement when he had promised that he would buy a land in their daughter's name for her future. Thankfully she had consulted a lawyer on second thought. The husband, as the natural guardian of the child, would have continued to have final say on the property. So, he was actually giving her nothing at all. It wouldn't have mattered if he had bought a land for their daughter. Tears flowed from her eyes as she remembered her daughter. Today she was confused, yet clinging to her father, since he had showered her with expensive gifts.

And she thought of her own mother. The same mother who in her childhood, was the symbol of security, now seemed a helpless ragged doll with sad eyes.After visiting the lawyer she had met her parents, but what could they do now? They were dependent on her brother, and her brother could express only sympathy not support. He had his own family to look after. And similarly with her friends.

She had swallowed her pride, gone back to the husband and refused the divorce. He simply raped her, and laughed at her, on his way out. Marital rape wasn't a crime according to her lawyer. And one pending divorce, had a punishment lesser than the other rapes.

Suddenly the crowd gathered around a journalist, who was asking the women if they felt outraged, with housewives being grouped with Commercial Sex Workers, Prisoners and Beggars, in the 2001 Census. The crowd grew shrill. Everyone lamented, then they moved on.

I feel worse than a commercial sex worker, she thought, with none existing to question my rape. And atleast the prisoners have a cell, I or my mother, don't have even a corner in our houses, to call our own. I am just like a beggar she thought bitterly, begging for mercy from family and friends. Just better dressed, at this moment.

She wanted to go after the journalist, grab the mike and shout at the camera. "Stop this hypocrisy. Just by putting us in a different group in the Census, doesn't mean a thing. Why did you wake up to this only now? If you care, change the laws, change the system. And fight till the end."

But she didn't. The pangs of hunger were louder than the pains of soul.

Taking a deep breath, she moved on, in her quest for a new job. Any job which paid, would be a dream job.

Later she came across a wedding party. She volunteered to work, if they would atleast give a meal.


Finally she was stepping out of her nightmare,
Silently she blessed, the married pair.
The bride was laughing, with dreams in her eyes
For none had told her, Dreams were Lies.
A Submission for Blogadda's Dream Job Contest. Wanted to write about Research Psychologist but when equated with Prostitutes Prisoners and Beggars, in the Census 2001, felt compelled, to write this story.

This post has been choosen as one of the winning entries. Thank you Blogadda! Needless to say winning is beautiful, but nothing would be more beautiful than to have laws which are fair and which reflect our values.
Where are our values, when we don't value her..
22 comments:

Sugar Swami and the Hand that Feeds

She heard her brother advise her son "Yes, target the anxious mothers, who are being constantly told by everyone around them, their child is too thin. If you sell to them, with couple of mumbo jumbo phrases, and assure them, thats enough for their child, it would be an instant hit. Of course for the child to take it, the main ingredient has to be sugar."

Her son added "I think if I say I have added a herbal component, it would be more easier."
Her brother gushed "Brilliant! You are smart my boy!"

She rushed in, and screamed at her brother, "I told you to advise him on career choices and you want him to become a Godman! The media will ridicule him as Sugar Swami and roast him!"

Both burst into laughter. Between his laughter her son said "No ma, the media will not roast me, after all, I will be one of the hands that feeds them."

Her brother cleared her confusion by clarifying "He is not going to be a Godman, just an Entrepreneur, marketing a new beverage for children."

Grudgingly she said "India is the diabetes capital of the world, you are not helping anyone by making the kids have more sugar"

Ignoring her, her son said "In our ads, we should claim it tastes so good, the child will come after you for it, and will lie or steal to have it. That should please the parents..".
10 comments: 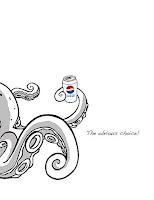 The World Cup might be end of the road for many players and coaches but could kickstart a new career for Paul the Octopus. And while he might make millions choosing between Pepsi and Coke, there are other interesting avenues open for him.

1.Adult Entertainment.
Well if people can google donkey sex (and arrive on my post on Sex life goes up in Smoke), won't similar people be interested in octopus sex. (Even if Octopus is a British slang for a sexually importunate man).

2.Peace by Piece.
If Paul could pick up the winner of a match, why not the owner of land. Simply start with a map and 2 flags. Middle East Conflict? Resolved! And no prizes for guessing the winner of next year's Nobel Peace Prize.

4.Godman.
Become a partner with any Godman in India, be a Private Psychic to Politicians and Stars, get a temple and a huge devotee following. What else would it want. Market an Octodollar that will bring luck and forget millions, Paul could be a billionaire.
Oh wait. There is a Godman who claims his soul went into Paul's body, because he was in Himalayas during the World Cup.

5.Expert commentator on TV.
A Predictor among the Predictable Crowd ,it would be interesting and a huge relief (one less shrill voice on TV), even if its not as lucrative as other options.

6.Reality Show Judge.
Replacement for Simon on American Idol? Thats a boring option. The interesting one would be Paul's Pathi-Patni. Tie up with NDTV Imagine to pick the winner in each round of its next Swayamvar. A Pathi or a Patni decided by Psychic Paul, which celebrity will say no to it?

7.Social Networking
Netizens bored with facebook, twitter and foursquare can pester their friends and strangers, by sending out invites to join them in Octreach. Tweets would be out, Squirts would be in.

Well I can forget other options. Heard the Breaking News on Twitter (where else). Modi is back as IPL Incharge in alliance with Paul. And since BCCI will be making millions by auctioning Paul's services (Team/Strategy Selector) amongst the IPL Teams, they have forgiven Modi for his technical mistakes. Oh well, guess its a smart move. If Paul Predicted the winner of IPL 3, who will watch the matches, and what will we do with our lives.
11 comments:

The eighteen month old child, woke up from his sleep. He heard his mother talking with someone over the phone. He got up silently, to reach her, when his eyes fell on a gift his mother had purchased for him. Quietly he went over to it, to remove it from its bag. It was a picture of his favourite animal, elephant.
With joy he snatched it from the box, but it simply fell into pieces.

He howled in anger and sorrow. His mother, who had been moaning about her life being blown into pieces by an unconcerned God, rushed to the child and explained it was a jigsaw elephant and it would be MORE fun to put the pieces together...